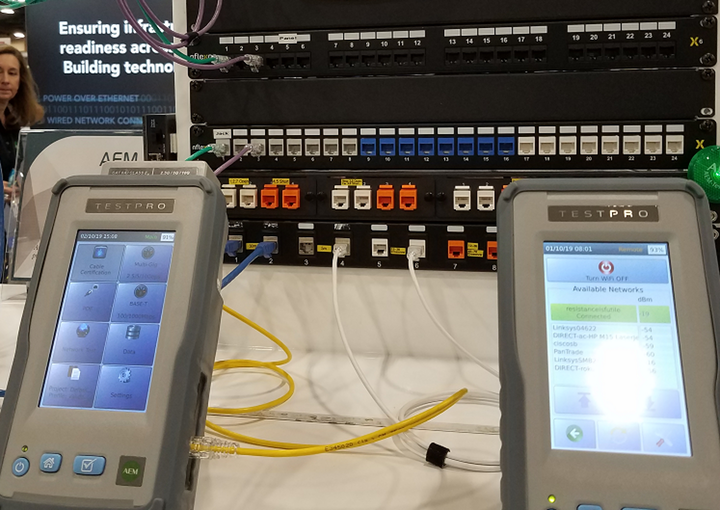 Simply put, the ANSI/TIA-568-C.1 specification cable standard – otherwise known as CAT6A – is the solution to the distance shortcomings of CAT6 when working with 10GBASE-T Ethernet.

By ANDREW FROEHLICH, West Gate Networks, LLC — Network and cabling professionals are likely to come across different Ethernet cabling standards over the course of their career. These range from legacy installs of CAT3 and CAT5e — to the modern ultra-high-performance data center CAT8 standard. Yet, for most access-layer installs, CAT6 and CAT6A are the two most common standards to choose from. This cabling will be responsible for connecting end devices such as PC’s, laptops, WiFi access points and a plethora of Internet of Things (IoT) devices.

When considering Ethernet cabling install options for access-layer deployments, there are several things to look at. One of the more important decisions is whether endpoints will require the higher speed and PoE performance of CAT6A – while being willing accept a few inconveniences that come with the deployment. In this article, we’ll walk through the benefits and drawbacks of CAT6A compared to CAT6. Additionally, we’ll point out real-world circumstances that justify the added cost and installation hurdles that come with running and certifying the higher-performance cabling.

One key benefit of CAT6A over CAT6 is speed. A CAT6 cable can run 10/100/1000BASE-T Ethernet at speeds up to 1000 Mbps and a maximum length of 100 meters. The same is also true for 2.5GBASE-T and 5GBASE-T running at 2.5 and 5 Gbps, respectively. However, when moving up to the newer 10GBASE-T standard that operates at speeds of 10 Gbps, CAT6 cabling is only supported up to a maximum distance of 37 to 55 meters, depending on the levels of alien crosstalk in the installation environment.

Considering that most building access-layer networking closets are built around a 100-meter maximum distance, 37 and 55 meter runs would end up leaving many cable pulls short.

The ANSI/TIA-568-C.1 specification cable standard – otherwise known as CAT6A – is the solution to the distance shortcomings of CAT6 when working with 10GBASE-T Ethernet. In addition to the speed/distance benefits, CAT6A is defined for frequencies up to 500 MHz and improved noise canceling properties. Both translate into improved Ethernet performance with fewer chances of external interference.

A second benefit of CAT6A that is growing in importance is that it can handle higher levels of power over Ethernet (PoE) output without any performance degradation. Endpoints such as WiFi access points, surveillance cameras, intelligent lighting and monitoring/automation sensors are growing increasingly power hungry. The latest 802.3bt PoE specifications support 60W (Type 3) to 100W (Type 4) of output per cable run. That’s as much as three times the maximum Wattage specified in the 802.3at (PoE+) standard.

Even though 802.3bt utilizes all 4 pair of wires as opposed to two, more power output translates into more heat on the wire. When cables get hot, they become susceptible to what’s known as insertion loss. Transmitting added power to end devices also causes an increased chance of DC resistance unbalance. Both problems are more likely to occur when running CAT6 cabling as opposed to CAT6A. CAT6A conductors are thicker – which can help dissipate the heat.

Additionally, DC resistance unbalance is less likely to occur in high-quality CAT6A cabling due to the likelihood that the cabling conductor diameter will not vary as much compared to lower cost CAT6 alternatives. Ultimately, the only way to verify that cabling runs adhere to 802.3bt standards is to perform cable certification tests using a tool such as the AEM TestPro CV100 combined with the AD-NET-CABLE adapter.

CAT6A Cautions
There are a few cautions that must also be considered before deciding to pull CAT6A over CAT6. For one, CAT6A cables are heavier and thicker compared to CAT6 specified cabling and lower. Thus, extra care must be made to ensure that overhead racks and conduit can handle the added size and load.

Next, if you’re planning on running a significant number of 802.3bt devices over CAT6A, be sure to account for the fact that the cables will be less flexible and more challenging to terminate – especially in tight spots. Again, simply knowing that CAT6A will be tougher to work with will help when mapping out cable runs, planning for more termination space – and an increase in time consumed to have technicians properly terminate the cabling.

The good news is, if you have a TestPro CV100, you can make up for the lost time. Because the CV100 can fully perform a CAT6A certification cable test in 6 seconds (far faster than other testers on the market) time can be made up during this stage of the installation.

Lastly, simply be aware that CAT6A costs more than CAT6. While the cost of the physical cabling has indeed dropped over time, it’s still significantly more expensive when compared to CAT6. Thus, choosing to splurge on CAT6A isn’t quite as cut and dry as one would think. In some cases, a combination of CAT6 and CAT6A cabling is used depending on the intended purposed of each run. Let’s look at some use cases where CAT6A would be justified despite the added costs and install challenges.

Still on the fence on whether you should spring for CAT6A cabling as opposed to CAT6? Here are some real-world use case scenarios where the added cost and implementation complexities of CAT6A are completely justified:

WiFI 6 (and beyond) deployments
11ax – otherwise known as WiFi 6 — can operate at speeds up to 10Gbps. Thus, if you want to avoid a bottleneck on WiFi 6 and future generations of enterprise wireless gear, you should opt for CAT6A wherever WiFi access points will be installed.

802.3bt PoE needs
As stated previously, the need for higher Wattage capabilities of PoE is increasing thanks to more intelligent – and thus – more power-hungry PoE endpoints. Common examples of PoE devices consume 60W or more include point-of-sale (POS) systems, digital signage, PoE thin clients, intelligent lighting and building management systems. If you anticipate implementing these types of devices in the next few years, it’s wise to take advantage of the high-power PoE benefits of CAT6A.

Surveillance cameras
Next-generation surveillance cameras that operate at 4K and 8K resolutions and include features such as pan-tilt-zoom (PTZ) not only demand higher-power PoE capabilities – but also transmit speeds up to 10 Gbps as they stream ultra-high-quality video footage to a network video recorder (NVR).

Uplinks between switches
If for whatever reason you cannot run fiber between switches, it is wise to run CAT6A and utilize 10GBASE-T Ethernet to prevent against bottlenecks on switch uplinks.

Cabling expected to last 5 or more years
If you anticipate the need to use this cabling for 5 years or more, the added cost and time required to install CAT6A is justified. Thus, for buildings that are difficult to “rip and replace” – it’s strongly recommended to run CAT6A for all new installs to help future-proof the investment.

ANDREW FROEHLICH is President of West Gate Networks, LLC. This article was republished with permission from AEM’s ‘Straight-Talk’ blog.